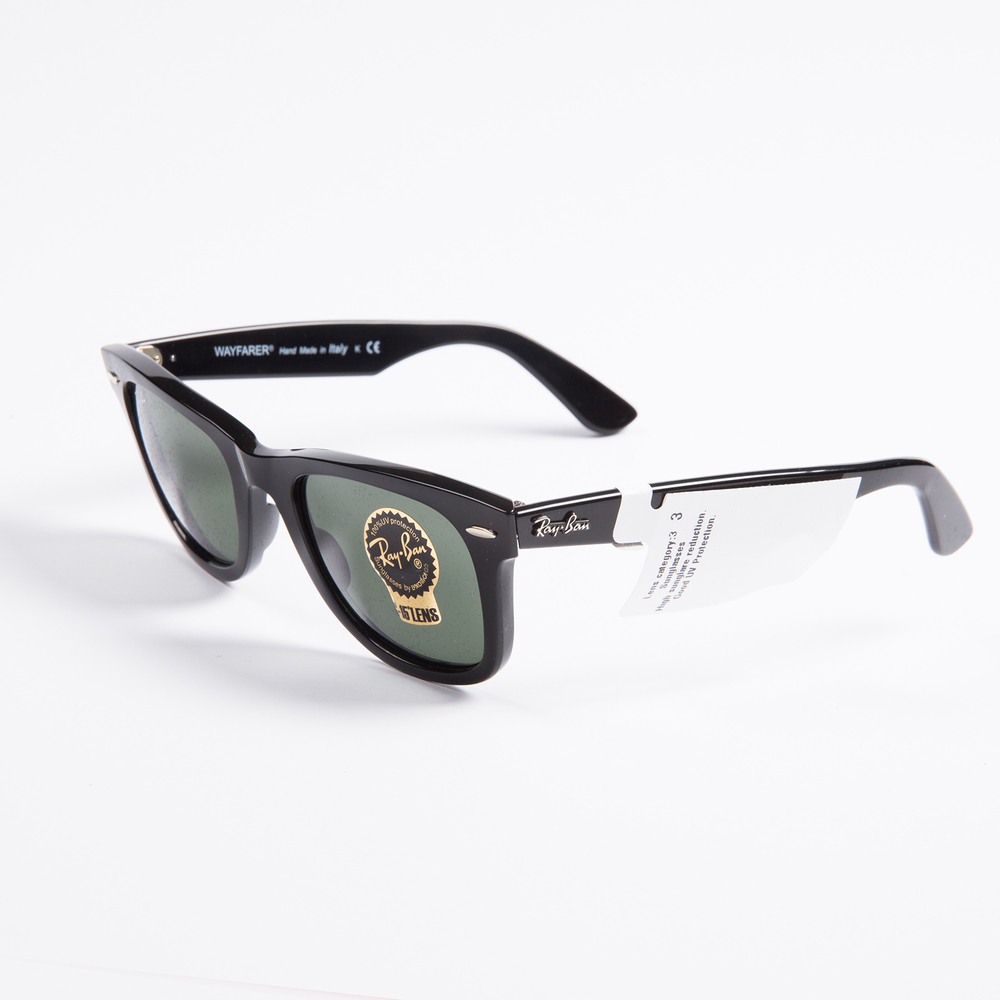 Arguably one of the most iconic sunglasses in the world today is the Ray-Ban Wayfarer. It has been synonymous to rock n roll, beach escapades, and high society living.

Believe it or not, Ray-Ban was almost shelved by parent company Bausch and Lomb when sales were dismal and the brand’s future didn’t look promising.

Things changed when Raymond Stegeman proposed a new design — a spectacle frame that made use of plastic technology, something that was quite innovative in the 1950s. The idea was to come up with a frame that steered away from metal materials.

The design was patented, and the Ray-Ban Wayfarer was born.

In the patent you can see how different it looks from the Wayfarers we know today. The original design is reminiscent of a cat-eye frame; the style was considered manly at that time and very much suited rock star Bob Dylan’s square jaw.

The design was a hit — It couldn’t have come at a more opportune time. The fifties and sixties were decades of mid-century modern movement. It suited the likes of John F. Kennedy and Audrey Hepburn and with such style icons flaunting the wayfarer design, other manufacturers couldn’t help picking up the style for themselves to produce.

The design was ever evolving during this time, and the once feminine cat-eye frame of Stegeman’s doing has now resembled a more squared off look that looks very much like the modern wayfarer we know and love.

The seventies ushered in the era of bright lights and disco dancing and the Ray-Ban Wayfarer was soon forgotten. In fact, sales were declining so rapidly that it was considered – once again – to shelve the design. During this decade the wayfarer was changing behind the scenes.

The year was 1981 and The Blues Brothers movie was released. The characters played by Dan Akroyd and John Belushi (Elwood and Jake, respectively) wore Ray-Ban Wayfarers and sales surged once again. By year&#39;s end approximately 18,000 units were sold. Quite interestingly, the frames worn by both actors in the movie weren’t identical; Akroyd’s frame had that distinct cat- eye look that very much resembled the original patented design, while Belushi’s rounded frames are still in production today.

This was Ray-Ban’s “Aha!” moment and they realised the importance of product placement. An investment of $50,000 with a California-based company named Unique Product Placement paved the way for the reemergence of the Wayfarer.

The iconic sunglasses was featured in sixty movies between 1982 and 1987. One of the more prominent product placement done was with Risky Business in 1983 when a young Tom Cruise sported the Ray-Ban Wayfarer. It suited the young actor very well and the movie helped kick start his acting career, not to mention the thrust the Wayfarer would eventually have into modern pop culture.

Over 360,000 pairs of Wayfarers were sold that year alone.

Product placement continued until 2007 and this was arguably one of Ray-Ban’s most innovative marketing strategies to date. The sunglasses was featured in The Breakfast Club and hit TV series like Moonlighting and Miami Vice. An annual sales of 1.5 million dollars gave Ray- Ban so much hope for the foreseeable future.

Other notable personalities that donned the Wayfarer were Michael Jackson, Jack Nicholson, and Madonna. Rock groups Queen, U2, and Depeche Mode were, at one point, also using Wayfarers. It was even featured in a song by Don Henley named Boys of Summer, while Corey Hart’s Sunglasses at Night music video showcased the artists wearing Wayfarers in the dark.

This aggressive and quite rapid exposure of the Wayfarer style shades forced Ray-Ban to expand from a mere two models in 1981 to forty by 1989. The popularity of the style was very much stemmed from the renaissance of fifties Americana during the eighties.

It was a completely different story when the grunge movement of the nineties began. The style was so unpopular and couldn’t compete with trendy wraparound shades from an upcoming brands called Oakley.

The wraparound shades were targeted towards athletes (and people who fancied themselves as such), and those who enjoyed the great outdoors. Its design relied more on functionality rather than style, which the Wayfarer was quite known for. This wasn’t good news for Ray-Ban.

In 1999, Ray-Ban was sold to Luxottica Group S.p.A. of Italy by Bausch and Lomb for hundreds of millions of dollars. Through this sale the Wayfarer had a facelift: it was then produced using injected plastic starting 2001.

They say the third time’s a charm – the millennium became Wayfarer’s time to shine again. Millennial “It” girls like the Olsen twins, Chloe Sevigny and Lindsay Lohan were photographed by paparazzi wearing vintage Wayfarers while out and about in town.

This encouraged the brand to release an updated version of the original design in 2007 and since then the Wayfarer has never gone off the radar. Ray-Ban has had different takes of the style over the years, with other optical brands following suit, making their own version of the Wayfarer.

Most face shapes can carry a Wayfarer pretty well, with oval, oblong, and round faces being the best ones out of the bunch. What makes the Wayfarer tricky to use is the size and color. We have a few style tips for you to try:

1. You don’t have to always buy black. While black may be a universal color in a sense that it will go with any style or occasion, this is pretty far from the truth. Black frames will go better with a darker skin tone, while fair and medium skin tones may opt to purchase the turquoise version instead.

2. Generally speaking the Wayfarer is more of a casual style of shades and should be avoided when you are in business attire. However, a pair of Wayfarers in a smart pant- and-suit ensemble will undoubtedly look dashing.

3. If the Wayfarer is the best suited frame for your face shape, splurge on the same style in various frame colors.

4. The Wayfarer is a classic shape of frames. Avoid light colored and white ones that will look gaudy in everyone. Darker colors complement the classy and timeless design of the Wayfarer.

The Wayfarer design has stood the test of time and is easily one of the most recognisable shapes in pop culture to date. Ray-Ban has been offering a variety of Wayfarers for people of all styles and tastes.

Great Southern Sunnies is proud to be an official distributor of Ray-Ban Wayfarer. Enjoy next- day shipping as your orders are usually processed the same day it is made. You also have the option of using AfterPay where you can wear your Ray-Bans now and pay later.

We understand that buying sunglasses can be tricky, so we’ve offered a return and exchange policy for all purchases. This allows you to exchange your Wayfarer for another size to better suit your face shape, at no extra cost!

Your First Order When You Signup To Our Newsletter. (*Excludes sale items)